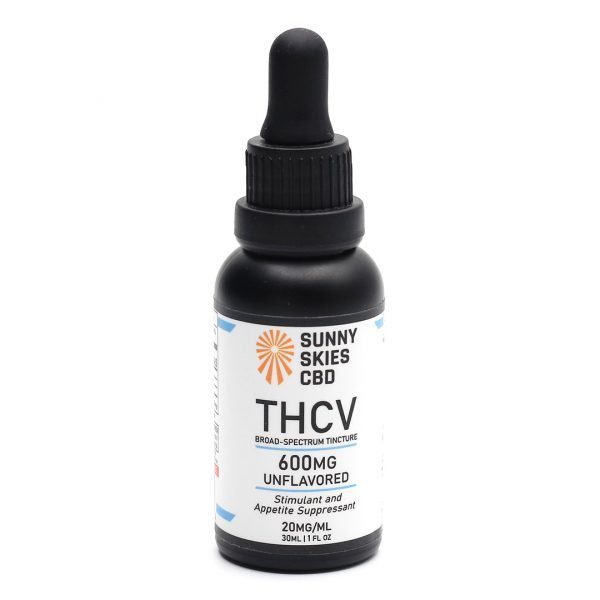 -Contains 0.00% Delta-9-THC.
|
– Hold under your tongue for 60-90 and experience faster absorption and higher bioavailability than edibles, capsules, and beverage products.
|
– THCV may dull the appetite, making it the only cannabinoid that functions as an appetite suppressant.
|
– Causes a “high” that is shorter in duration than THC, less intense, and has a mild stimulant that can improve cognitive function.
|
– Ingredients: Broad-Spectrum THCV Distillate, MCT Oil.
– All-natural ingredients, non-GMO, gluten-free, vegan friendly, with no animal testing. Free of contaminants (lab tested for pesticides, heavy metals, microbes, and residual solvents).
|
– Learn more about THCV here and in our blog here.
SKU: THCV6 Categories: Our Online Store, Tinctures (CBD Oil Drops) Tags: thcv, thcv tincture

Tetrahydrocannabivarin (THCV) is a cannabinoid that, if present in high enough doses, can interact with the body’s endocannabinoid receptors to induce psychoactive effects. THCV, like Delta-9-THC, can act as an agonist of the body’s CB1 endocannabinoid receptor, although the effects of THCV are much weaker than THC. At lower doses (10-20mg) THCV can behave as a CB1 receptor antagonist, meaning that it has the potential to attenuate some of the less-desirable effects of THC that are thought to be CB1 receptor mediated, such as poorer motor control, lessened cognitive function, and even the food craving “munchies.” A tincture is a sublingual oil. THCV distillate is infused into medium-chain triglycerides (MCT oil) from coconuts, which serves as a carrier oil. Tinctures are ingested orally. Fill the syringe on your dropper to 1ml and squirt under your tongue. Hold under your tongue for 60-90 seconds before swallowing.